​The growing popularity of cannabis oil is leading to more positive tests for tetrahydrocannabinol (THC), the psychoactive component in marijuana.

But what exactly is cannabis oil? Can workers get high from it? Why would they use it? Is it illegal?

Experts weigh in to keep HR professionals and managers up-to-date on the ever-changing reality of drug use in the workplace.

Cannabis oil refers to concentrated extracts from cannabis and could be pure THC, pure cannabidiol (CBD) oil, or a combination of these and other chemicals, said Sara Jane Ward, Ph.D., a professor of pharmacology with the Lewis Katz School of Medicine at Temple University in Philadelphia.

People who use cannabis oil or CBD oil sometimes have disabilities, and their use of the product is understandable: to reduce pain or anxiety, help with sleep, treat tremors or symptoms of epilepsy, and alleviate multiple sclerosis symptoms, for example.

“There's no high from CBD oil made only from CBD,” said Amy Epstein Gluck, an attorney with FisherBroyles in Washington, D.C.

A product labeled as hemp-derived CBD is extracted from the hemp variety of cannabis, which is typically low in THC. CBD can be produced in a spray, lozenge or cream. These products must have less than 0.3 percent THC to be legal under federal law, but “regulation of these products is currently very loose,” Ward said.

An employer might not be able to tell whether a positive test for THC was caused by the use of cannabis oil rather than the abuse of marijuana.

And a positive test for THC may not necessarily mean that an individual is impaired, because THC can remain in the body for weeks, noted Jennifer Mora, an attorney with Seyfarth Shaw in Los Angeles. Employers may choose to test for THC in job applicants, employees who seem impaired or work in safety-sensitive positions, or to maintain a drug-free workplace.

If someone tests positive for THC, the employer might have a conversation with the person to see if he or she can explain the test result, which could give the individual the chance to request a reasonable accommodation. Some employers may not want to have this conversation, though, for fear of going down a slippery slope: Anyone who tests positive for THC might say he or she used only CBD oil. But there are signs when someone is impaired on the job—such as red eyes and delayed reaction times.

“Many of the CBD oils on the market are unregulated, and while a buyer may think the product has no THC or very little THC, there is no way to know for sure,” said Kathryn Russo, an attorney with Jackson Lewis in Melville, N.Y. Research published by the Journal of the American Medical Association has shown that 43 percent of CBD oils tested contained more THC than was labeled on the bottle. “This means that a person using these products might test positive on a workplace drug test for marijuana, particularly if they are using it in large quantities on a regular basis,” Russo stated.

While cannabis oil can contain any range of constituents, including THC, hemp-derived CBD products are supposed to contain only up to 0.3 percent THC, and some contain no THC. But some products are labeled as containing less than 0.3 percent THC when they have more.

“In a product that does contain 0.3 percent THC, there is still a potential to test positive for THC, depending on the amount consumed, the frequency of use and individual metabolism of the product,” Ward said. “There is also a chance that pure CBD tests positive for THC, depending on the type of drug screen used, but this is much less likely to happen.”

Some think that CBD can be converted to THC in the body, but there has been little evidence of this so far, and more research is needed, Ward added.

In some cases, people use high quantities of CBD. The typical amount used is 10 to 30 milligrams per day. But the prescription CBD product Epidiolex, which is FDA approved for the treatment of childhood seizure disorders, is taken at doses of 300 to 800 milligrams per day, she noted.

If someone who is using CBD oil keeps his or her use of it private and tests positive for THC, “employers should refrain from taking action until they have a conversation with the worker,” Gluck said. An employer might decide to make an exception to its drug policy if the person has a disability for which he or she uses CBD oil, particularly if he or she is not impaired on the job. 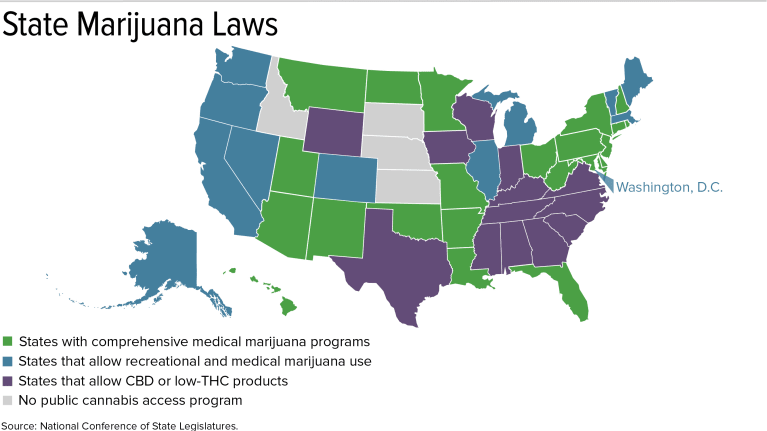 If someone tests positive for THC, he or she might say that the positive test result was caused by the medical use of marijuana, which can be used in an oil form, or through CBD oil use, which also might be for medical reasons. “Whether or not the employer takes an adverse employment action will depend on the applicable state law and the nature of the individual's job,” Russo said.

“If an employee is taking CBD oil or cannabis oil—which often has higher concentrations of THC—in accordance with a state's medical marijuana laws, there may be some state law protections for the employee,” said Sally Culley, an attorney with Rumberger, Kirk & Caldwell in Orlando, Fla. “Otherwise, employers with zero-tolerance drug policies are free to discipline employees for failing drug tests, even if the ingestion of THC was inadvertent.”

Disciplinary action, discharge or deciding not to hire someone who tests positive for THC might be justified, even if it were due to the use of cannabis oil, especially in federal jobs, federal contractor positions and safety-sensitive jobs, said James Reidy, an attorney with Sheehan Phinney in Manchester, N.H.

But employers should understand that in some regions, it is no longer lawful to have a zero-tolerance policy for marijuana or CBD use, Russo remarked. For example, Nevada and New York City will limit the use of pre-employment marijuana tests next year.

Some employers have stopped testing for THC when drug screening job applicants. This is due not only to laws limiting pre-employment testing, but to “more accepting attitudes toward marijuana use and to widen the pool of qualified candidates,” Culley noted.