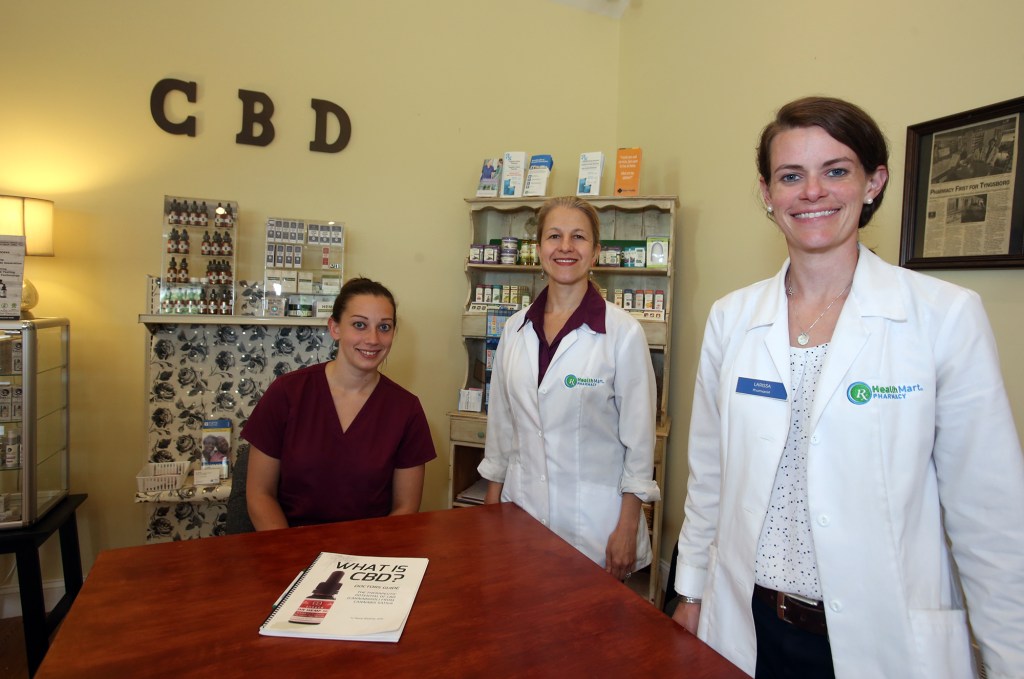 You see it advertised everywhere: local shops, pharmacies, convenience stores, even gas stations. It can come in an oil extract, or be part of topical salves, inside prepackaged treats for people and pets, or in some instances, added to your latte at a local restaurant.

In recent years, cannabidiol has become ubiquitous, as more and more businesses jumped on the CBD train and the benefits of the hemp-derived compound became better known. The naturally occurring cannabinoid is used to promote relaxation and better sleep, reduce anxiety, inflammation and pain, and, unlike the marijuana compound tetrahydrocannabinol, or THC, does so without getting the user high.

But, thanks to policy statements released at the federal and state levels, that train of unfettered sales appears to be in danger of derailment.

In June, the state Department of Agricultural Resources released a policy statement banning the sales of several hemp products, including any food products containing CBD, any product containing hemp-derived CBD that makes therapeutic or medicinal claims, any product with hemp as a dietary supplement and any animal feed that contains hemp products.

The state guidelines were in response to an earlier statement released by the Food and Drug Administration, which noted that while hemp was legalized at the federal level through the 2018 Farm Bill, the FDA has not approved any food or dietary uses for cannabis and derived compounds, including CBD, for interstate commerce. The agency says it wants to conduct more research on the unproven health claims about CBD.

“Ultimately, we remain committed to exploring an appropriate, efficient and predictable regulatory framework to allow product developers that meet the requirements under our authorities to lawfully market these types of products,” the statement read.

In the meantime, most states are falling back on the FDA guidance. In Massachusetts, the sudden policy shift has left retailers and farmers across the state to figure out what they can still sell and grow and what they can’t, while the governing authorities determine how to proceed.

“We implore your administration to immediately halt any enforcement of the June 12, 2019 Policy Statements and to direct regulatory agencies to clarify that all parts of the hemp plant, including hemp-derived cannabinoids, are considered food and, as such, may be sold for human consumption or added to products, including those intended for human or animal consumption, and such an addition is not considered an adulteration of such products,” the leadership of the Northeast Sustainable Hemp Association, Northeast Organic Farming Association/Massachusetts and the Massachusetts Hemp Coalition wrote in a joint letter to Gov. Charlie Baker last week.

Massachusetts finds itself in an interesting predicament in which marijuana products are allowed at licensed sellers, but CBD edibles are not.

Ezzio said it has been a great addition to the pharmacies, both for patients who use it in conjunction with conventional medications and those who are able to wean off of them as they use CBD. While the pharmacists can’t suggest or recommend CBD products to patients, they are able to educate patients who inquire about CBD as to how it may interact with other medications they are taking, she said.

In her 42 years as a pharmacist, Ezzio said she has not seen a dramatic response that rivals that of CBD. She said customers tell her all the time how much it has changed their lives, from people with arthritic pain to those with physically demanding jobs.

“The response has been overwhelming,” she said. “We can’t keep it on the shelf. Demand has been continuous for it.”

While the pharmacies have had to remove such CBD food items as gummies and truffles from their shelves, they’ve been less impacted by the policy change than other CBD sellers. At Tyngsboro Family Pharmacy, for instance, most customers come for the pure CBD oil and topical creams, which aren’t included in the ban, said pharmacy tech in training Jocelyn O’Connor.

Hubbard, who primarily runs the Tyngsboro location, said she learned from legal guidance offered by an industry group that CBD product labeling is a big factor in what is legal and what isn’t. She said the pharmacies may be able to continue to sell some of the products they initially removed, as long as the items don’t make any specific health claim — such as purporting to treat a specific disease, structure, or function of the body — or aren’t labeled as a food or dietary supplement.

Hubbard said she is hopeful regulation will bring more pharmaceutical-grade CBD products of a high quality that can be independently tested and verified.

Her brother, Kyle Ezzio, who owns several vape shops around Massachusetts and New Hampshire, would prefer the government leave it be, rather than placing restrictive new regulations on CBD. His Lineage Vapors stores have sold a variety of CBD products, including vapable and edible items, for the past four years.

“I think CBD is an extremely valid way for some people to not have to take medications, and take something natural,” Kyle Ezzio said. “I think that the government, in taking this way, all they are doing is looking for another way to tax something. They’re taking it away because they’re not getting as much money from pharmaceutical companies.”

Kyle Ezzio is also in the process of opening up a new CBD-focused venture in Nashua, called Emerald CBD Apothecary. The store, scheduled to open at 295 Daniel Webster Highway this week, aims to sell a wide variety of CBD products, “from pet treats to bath bombs,” in a professional setting that doesn’t carry the stigma some may feel going into a vape shop, he said.

The site is also set up with a bar to offer CBD-infused coffees, teas and protein shakes. However, that component is likely in danger, given the similar policy guidelines released by the New Hampshire Department of Health and Human Services stating that CBD is not a permitted food additive in the state.

But in less-restrictive Lunenburg, the CBD products were numerous and filled a full display case that showed items like infused coconut oil, gummies and honey sticks, he said. Since the new policies came out the offerings have dwindled, and are now limited to certain CBD oils and tinctures, and any remaining items that are being sold at reduced prices to move the products out.

As a result, the store has lost customers, McGonagle said. As they find the products they want are no longer available, they go and find it elsewhere — primarily online, or to the recreational marijuana shops, he said.

“It’s just kind of stopping us from doing the job that we felt we’re here to do,” McGonagle said.

Not everyone is comfortable with going to the pot shops, or may be drug tested at work and can’t use products that include THC, he said. McGonagle said stores like Lineage can provide what they need in a more comfortable atmosphere, and he’s heard from many customers how much the CBD has helped them and their pets.

The health benefits were the primary reason Roots Natural Foods in Leominster got into selling CBD, according to owner Marieke Cormier, and the store prides itself in offering only products of the highest quality.

Roots used to offer CBD add-ins to its prepared food and drinks, but stopped doing so upon receiving guidance from the local Board of Health, Cormier said.

“There’s a lot of gray area, and I think the main thing that changed was, we’re not allowed to add it to any food service items,” she said. “It definitely impacted sales. It was very popular. We had grab-and-go items that had CBD.”

Cormier said the sudden change in policy is having a “pretty devastating effect on a lot of CBD companies.” For now, her store continues to sell CBD tinctures and a few other items, but she hopes that the state regulations will “open up, and that we can offer good products that are healing to our customers, that we think is beneficial to their health.”

A portion of the policy guideline disallowing animal feed containing hemp products may impact pets who have enjoyed the benefits of CBD.

Paul LaMadeleine, of Chelmsford, said his oldest dog showed a marked positive response to treatment with CBD — but now his veterinarian will no longer provide the CBD treats because of the policy.

Dolly, a 14-year-old hound and Catahoula leopard dog mix, in recent years developed severe arthritis in her right front shoulder and a condition that is causing her rear leg muscles to atrophy, LaMadeleine said. She was on the anti-inflammatory medication Rimadyl for a couple years, but its effectiveness waned and he didn’t want to put her through the side effects of a larger dose. They tried another medication for about a month, but the side effects were even worse, he said.

LaMadeleine decided to try the ElleVet Sciences hemp CBD chews for dogs sold at Countryside Veterinary Hospital, a product proven in a clinical trial to relieve soreness and stiffness in dogs. For almost a year, LaMadeleine has given Dolly the hemp chews twice a day.

“She picked up tremendously,” he said. “She got more energetic, more aware. She wanted to go out for longer walks. She wasn’t just sleeping all day. She just seemed happier all the way around.”

Then, last week, LaMadeleine received a call informing him he could no longer buy the treats from the vet. He’s now looking for alternatives from other reputable sources, to ensure that Dolly can continue the CBD therapy that has drastically improved her quality of life.

“I can understand trying to get it out of gas stations, because you don’t know where they’re getting their stuff,” LaMadeleine said. “But from vets and other valid sources — people that do their due diligence on this stuff — I don’t understand why (the state) would be cracking down on those areas.”